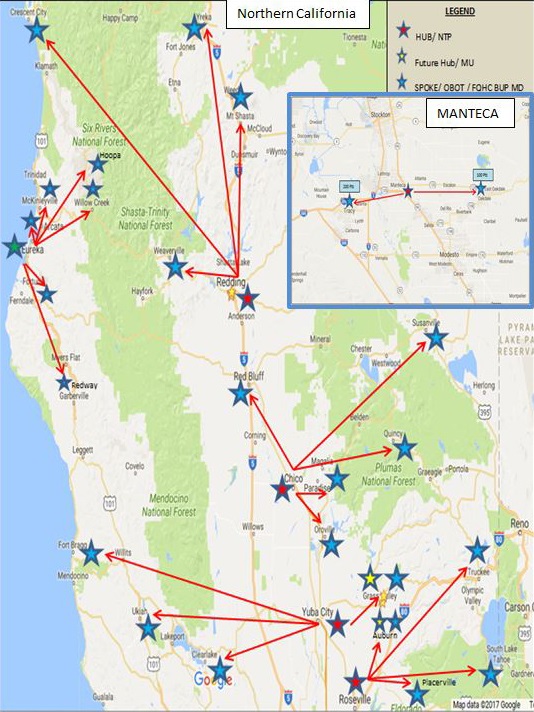 What is Aegis?
Aegis is the largest outpatient center in California for heroin and opioid addiction treatments. In August 2017, Aegis awarded six grants via the Department of Healthcare Services to combat the opioid epidemics in rural California, and one of these grant recipients was Chico. These grants are using the “Hub and Spoke” model, well-received in rural Vermont, which is expanding access to Medication Assisted Treatment (MAT) in rural counties. A “Hub”, such as the Aegis Treatment Center in Chico, serves as the addiction center of expertise, while multiple “Spokes”, such as clinics throughout Butte, Plumas, Tehama and Lassen counties, serve as clinical service providers. The Aegis Treatment Center in Chico actively coordinates with the Butte-Glenn Medical Society Drug Abuse Prevention Task Force.

What we have done so far:
The BGMS Drug Abuse Prevention Task Force has had many accomplishments Part I of our Aegis Grant funding. In May 2018, we hosted the 2018 California Opioid Summit, an event that drew over 400 people from across the state to Chico State University to hear from experts in the field. In October 2018, we organized the Opioids During Pregnancy Education Event, and last month we brought together medical professionals for the Perinatal Opioid Symposium at Enloe Medical Center (please see this previous blog post for more information). In addition to these events, we have used grant funding to distribute Deterra® Drug Deactivation System packets, which allow for the safe disposal of excess prescription pain killers, and ran a Medicine Disposal Ad in the Chico News & Review.

What we plan to do for Part II:
For Part II of the Aegis Grant Funding, we already have multiple projects in the pipeline.

The development of a Chico News & Review supplement is well underway, aiming to bring awareness to how far Butte County has come over the past two years in our battle against the opioid epidemic. This supplement will include interviews with some of our BGMS physicians as well as members of the Butte County community, and has an expected release date in June.

In early June, to coincide with the Chico News & Review supplement release, we will host an X-Waiver education event specifically for providers. Physicians are required to complete an eight-hour training to qualify for an x-waiver to prescribe and dispense buprenorphine. This event will be designed to educate physicians on the importance of having x-waiver certified providers in the community and encourage them to complete the training.

We are creating three educational videos, in collaboration with media production specialist Kevin Kelly Ulrich, to raise awareness and to provide information for patients, providers, and community members on the local opioid epidemic and the hard work that the BGMS Drug Abuse Task Force is doing to combat it. Keep an eye out for these videos which will be launched in the upcoming months on the BGMS website.

We are grateful for being able to complete so many projects this past year and a half thanks to the Aegis grant and look forward to everything we have planned for the future with this continued funding.